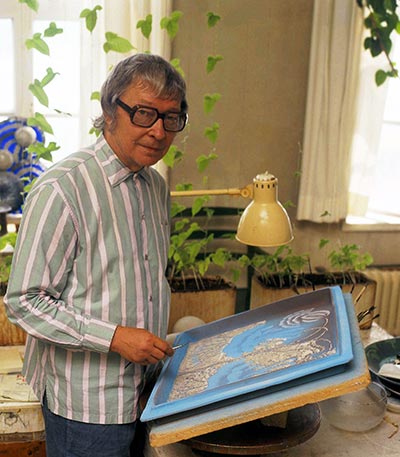 Birger Kaipiainen (1.7.1915-18.7.1988) is one of the most famous and internationally awarded ceramic designers of Finland. Birger Kaipiainen made a long career at Arabia Art Department creating thousands of unique artworks and also designing several tableware e.g. Apila and Sunnuntai in 1970.

Birger Kaipiainen was well-known for his romantic and colorful style which was not typical in Finland. His enormous attention to details and endless desire to decorate is well-reflected in his artwork which typically have hundreds of glass pearls and all of the empty spaces filled with different ornaments. According to Harri Kalha (the art history docent of Helsinki University) Birger Kaipiainen mixed art categories and still raises questions. His original mysterious picture-fantasy already fascinated his contemporaries​, but on the other hand, in the field of modern design, his rich imagery was disliked. In visual arts circles, the overwhelming decorativeness was marveled. On this day, ceramists absorb ornaments​, designers colors and artists organic themes resembling those of Birger Kaipiainen.​

The main themes of Birger Kaipiainen's artwork included flowers (especially violas), female figures, butterflies, dragonflies, fruits, berries and birds namely curlews and  larks. Apart from the polymorphic forms gleaned from nature, he was also influenced by historical styles and classical era ceramics. Kaipiainen loved literature, classical music, opera, ballet and jet set parties with his celebrity friends including Armi Ratia (founder of Marimekko). Birger Kaipiainen has been characterized to be a ceramics painter who liked to play with different forms and shapes between the boundaries of two and tree dimensional spaces. His ceramic unique artworks show signs of both cubist and surrealistic characteristics. He was influenced also by Byzantine, early Renaissance and Karelian mysticism. Nothing seems to have restrained his imagination and he once said: "Imagination does not cost anything. It does not have limits and no one can tell where imagination ends."

According to Birger Kaipiainen's long-term assistant Terho Reijonen, Birger Kaipiainen never praised his own work. Occasionally it seemed that some artwork pleased him especially much. That encouraged him to continue with the same style, same colors, same animal and plant themes. He has said that a new one will be created on the former basis​. Birger Kaipiainen also loved worked with other materials than ceramics. He drew numerous sketches and painted paintings as well as designed two very popular wallpapers "Kiurujen yö" and "Ken on kiuruista kaunein" which have been bestsellers since 1950s until today. He also designed costumes for several opera and ballet performances and a cloth doll "Annamolla" in 1967 for the readers of Anna magazine.

Birger Kaipiainen was a passionate designer who continued his career also after his retirement working almost every day until he died at age 73 at home after a typical working day. His colleague​ Oiva Toikka reminisces: ”Aristocratic Birger Kaipiainen was the prince of ceramics​. He is inimitable, he cannot be compared to anyone.”

Article about Birger Kaipiainen in Wikipedia.

Decorativeness is the oldest human obsession. If it is castrated off, man becomes a weakling.

Imagination does not cost anything. It does not have limits and no one can tell where imagination ends.

on his 60th anniversary in Helsingin Sanomat

I hate monotony and simplification. And those who simplify, hate me. 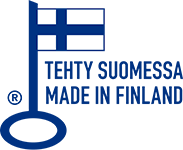 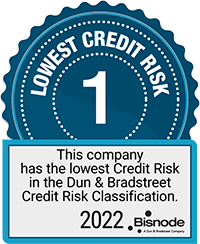 Drop us a line!